An Arrow for the Lonely [poem] 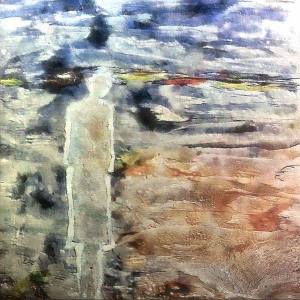 This pointy little arrow made of sun
is aimed at those whose loneliness
has overrun and emptied out the cup
which kept you sane and now is only
blindly straining nothingness again.

For this is not the first time that your
hope has died in spite of all the times
you’ve tried to find some soulmate or
a twinly soul (anything to fill that hole)
for on your own you’re desolate.

To you I wish to say some words.
They’re all the funny wisely things
I’ve told my lonesome self for years.
But now I’ve followed my advice,
at last. It’s meant, for me, less tears.

Strange to say, we’ve not been born to
paper over cracks by filling in the hole
which ever hovers hellish over us,
or covering our only one-way tracks.
For only after drowning can we swim.

There’s a difference between alone
and simple loneliness. The first
describes so well our natural state
(or should I say “UNnatural”) while
the second’s how we twist its fate.

“Unnatural” I say because alone
we are upon this broken stage;
and no amount of moving round
the sunchairs on Titanic’s deck will
make that ugly gash politely go away.

We’re all alone; no matter who
we’re with or what we own or
where we work or how grown-up
we think we really are or how
sophisticated is our repertoire.

Our yearning hotly for another soul
to love is rooted mainly in our vain
desire within this briefsome role to
find our way back to the state we
knew before this gift of lifeness grew.

For once upon a time, before we
were a twinkle in our parents’ eyes,
we tasted a together-oneness which,
on earth, we’re doomed to try and
reproduce inside another’s thighs.

But, if every loving tryst we strew is
merely just a substitute (in ignorance)
for what we knew before we broke
from spirit-bliss and grew, we’ll miss
the point of what we’re here to do.

Thus, only if we’ve learned to be alone
without dependency on someone
else’s buffer-zone commingling juicely
with our own, we’ll then be free to meld
at will (or not) and tie that lover’s knot.

Until you’ve lived in solace with yourself,
you’ll not be any use to anybody else.
Acceptance of our loneness state is thusly
de rigueur before we step up to the plate.
(You’ll find a lengthy celibacy helps).

For loving love as one, instead of being
a hindsight thing — us vainly trying to
reproduce what was before our flesh —
must be anticipatory of what’s to be
and not born out of slavery to two.

So if you have a yen to overcome that
loneliness and yearning for the soulmate
of your dreams, the remedy, it seems, is
first contentment with oneself; and then
a match may manifest behind the scenes.