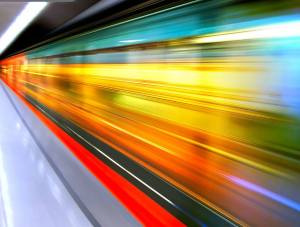 A lost and latent little boy I know
[but cannot tell his secret vinely name]
(whose trousers hung upon his wire-doll frame like
cobwebs on an ancient chair and from his head some
strands of straggly hair enshuddered on his wrinkle
withered forehead and his sunken cheeks like hands
of seaweed fingers dangling as eternal refugees)
held out his arms while standing straightly
(upright back)
with laughter on the railway track
and screamed these words
with all his grizzled heart
(into the nearby trees his notsofinal statement tore):

“I tell you I can breathe no more; my time is done.
I must have love — forego all else and savour death —
I’m at the end of what I call my trial run.
And so I stand before this uncontrolful juggernaut
with clean and penitential hands. The goodly fray I fought.
I made my futon in the foggy dew. Now I have this crimson
rendezvous (and countless answers which I never knew).
This is the only avenue down which I’m able
once and for all time design a welcome heavenly home
enflamed with ruddy roses round the broken frame.”

And with the closing of that dreamstate speech
the brakes began to groan and wistful wildly screech
(but just for show; the train’s intention never was to stop
before the impact shock, as you’ll soon know).
I couldn’t help but notice that his face was glowing
just like sunlight through a mist.
At which the fender of that crazy train
his slight and sylphlike body
full and holesome kissed.

Like parched old leaves when blown by Autumn’s
notsojoking winds from off the trees,
his scattered cells were blasted randomly
across the tracks and all adjacent green terrain.
Some air escaping from the brakes intoned his hope
and huffed: “I will be back again (though next time
please reserve a space for me inside that train
so I won’t have to by its front be smashed
into a zillion smithereens).

I hope by now you’ll realise that all this is a metaphor
to demonstrate that when you’re smitten truly by
the train of love [and here I’m not just speaking of
a tryst with human flesh but something else which
wallops you with unexpected force & then, if you will
let it take its course, disintegrates you from above]
there’s nothing of you left which will be recognisable
or as you were before. [For death, correctly understood
as perfect change, is preferable to life wherein all love
is frivolous & disarranged]. Then when you’ve scraped
your multitude of scattered cells up from the floor
& pieced them all into some brand new human shape,
it won’t only be you that’s changed but how you view
the world and see yourself. You’ll also have some
reinvigorated definitions of such words as me and you
& power, independence, past & present, future, wealth.

That once-was-little boy became a man & having been
run over by its wheels, he finds himself now standing
floatingly inside that speeding tram with sequins in his hair
and poised upon a chair, without his clothes, with flowing
mane and nymphs and sirens have now joined him there.
For love that’s from above will also function horizontally —
magneticlee. Thus, soulish presences will multiply and
every all leads meltingly towards the sun & stars & sky.