Puking All the Way to the Bank [poem] 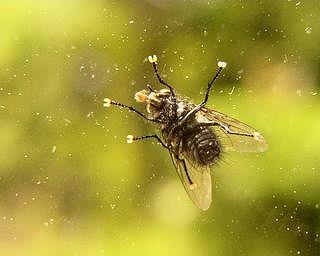 On one side of the woozy window’s glass, a fly
meandered aimlessly (or so it strangely seemed
to me from where I sat). But who on earth am I
to understand the crazy antics of a fly when I
can barely comprehend the reasons why I’m
destined randomly to ramble just like that?

A purpose is to everything assigned (even a fly)
or so I’m told by speculating minds who’ve
merely read a book or two or channelled voices
in their heads alleging to come from the dead
or aliens of many kinds, although I must confess
I find {& here’s the rub!} that all the stuff which
each voice inly says inside their heads spews out
in blatant contradiction to the others!

Just because some other person, weirdo voice,
or alien of choice makes claims to surely know
what lies behind the grand design of everything
does not impress, because these figments of the
Land of Oz or any calculated guess would have the
same insanely inhumanely relevance as any other
dredged-up so-called germane elements of all
the thousand convoluted oft-disputed fanciful
and war-polluted branches of philosophy, religion
which can only ever represent a smidgen smudge
of truthfulness derived in vain, though avidly
received by desperate brains determined to be
fraudulently tranquillised and wantonly anaesthetised
in order to substantialise those things which only
now can be (and with the utmost charity) described
as rhetoric or hopeful echoes made to queries
(though, in fact, they’re nothing more than wishful
thinking based on inklings — groundless theories).

Gurus, teachers, coaches, preachers, therapists and
many other forms of parasites and leeches boast
about their millions made through human ignorance
(although, in fact, that is the sole commodity in which
they trade!). Proudly citing how they make their
wealth through what they call ‘the laws of attraction’
they cynically enact the age-old code of greed whose
affluence depends on the extraction of your money
from your purse (your stash they’ll without conscience
bleed) or where there’s muck there’s brass, the whole
deceptive concept so corruptly crass and rank that
every starving gnarled uncompromising artist writer
dreamer sculptor poet will be puking up the whole
way to their non-existent double-dealing banks.

How come a global so-called “new age movement”
claiming peace and love through simple living lore
became instead a New Wage/Get Rich Quick galore?
A club for Cash-is-King proponents, smug prosperity
and gleaming teeth like any other vulgar salesmen
stinking of hypocrisy [beneath]. Try speaking of such
things to dignified and eloquent old men who’ve
served an unjust sentence in the Pen or those who
through no shady actions of their own have into
bankruptcy and penury been thrown. I’m speaking
here of those who’ve lived exemplary civic lives
who’ve cared not just for children and their wives
but charitably given what they could, only to find
that in the end they were deprived of every little
semblance of the luxury of human brotherhood.

Prosperity and health are not our earthly right
despite what many now would seem to claim.
For if we never suffer any loss or never have the
swanky gloss knocked from our smugly shine then
we will fail to grow or be transformed to who we’re
meant to be at some stage further down the line.
It’s said that pride will come before a fall. One day
all these extortionists (yes, all!) will crumble into
grinning bones immersed in flesh to dust, a symbol
of the Universe’s vindicated horror and disgust.

In case you’re wondering how we got to this hard
lesson from the little story of a wandering fly, it’s
simply this: For every fly there is some grinly gink
who’ll claim to give a reason why. And in no time
you’ll see that he or she will start a following, a
movement or a plain old cult and in the end the
net result is people leave their thinking with their
footwear by the door and cease to have a roving
probing shit-disrobing leave-no-stone-unturned
exploding mind of any decent comely kind at all.

And so, I hereby promise I will always share with
everyone who cares my heartfelt art in any way
I can, so long as I have airly breath within and
atmosphere without and in exchange am able still
to eat and live with tiles above my vulnerable head,
a reasonably comfortable bed, and though I don’t
expect to live for hypervery long maybe there’ll be
some scintillating sanctuarish company along the
weary wonderful and wyndly weaving way to share
my sighly soaring love-stream pouring melismatic song.