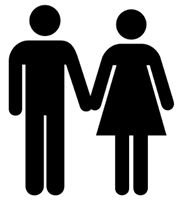 We’re equal, spat the woman to the man.
Whatever you can do, I also can.
We’re just the same, she said, with venom voice;
the only difference is I have less choice.
He gazed at her with kindness in his eyes —
which she thought was a patronising stare
for men to her were something to despise —
if only she could see how much they care.
For deep inside her heart he saw a hurt
and damaged soul — her pain she had transformed
into this sharp unkind abrasive curt
self-righteous creature, whom he now informed:
Although we’re equal beings on this earth
We’re here to complement each other’s worth.