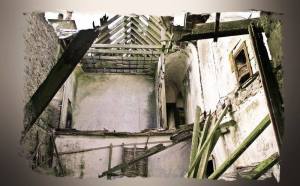 Today I visited the Estate Agent’s office
to discuss my holdings on this alien earth.
I needed an evaluation done so
I thought she would be just the right buffoon
to tell me exactly what I’m worth.
(Holdings is a funny word, for,
as any half-sane genius has heard it sung
in what must be the best song of all time:
“There’s nothing you can hold for very long”).
No truer word was ever spoke
though if I’d penned that line
it would have said (this is no joke):
“There’s nothing you can ever hold at all”.

They call it Real Estate
but yet there’s nothing real about it.
We think we own a plot of land;
it’s nothing but an idea built on
suckyouintolifelongdebt quicksand and
it’s makealotoffastbucks for the middle-man
[or woman, so you know I won’t let such
a little thing as rhyme to come between
your sensibilities and lessly mine]
(though business deals a man like me
will never fully understand).

A voice denounces me for who I am
(a “worn and spent old man”) and says
“at your age, guy, you should by now
have filled your property portfolio
with many buildings, lands and flats
with copious savings in The Halifax”.
In my defence I boldly say
I’m asset-rich and penny-poor
although my assets aren’t of much allure
to fascinate the girl who digs for gold
but I have other things (or so I’m told)
which can’t be stored inside a bank
which no one can afford to buy
the like of which will never ossify
for taxation purposes cannot be classified
and will not profitably multiply.

I am the owner now of nothing
but a few guitars and vanished dreams
a multitude of unaccomplished schemes.
Broke but not yet broken —
bespoke in every way and, too, awoken.

Looking at the brochure in the agent’s office place:
I thumb through all the properties available
to destituted clients such as me.
A woman with some brogues and fine moustache
encups her hand (a greasy paw) around my elbow,
then she whispers in my ear, “I say, old son, let’s see…
now… these could be the ones for your portfolio:
A little cottage nestling down in Degradation Alley
[darkness, faeces and TB are openly on show!].
A mansion to get-away-from-it-all in Humiliation Valley
[the previous owner’s face still in the dirt].
But finally, the best, in the opinion of this expert
[though I knew this one from many years ago]
a bijou condominium in Desolation Row”.

Spoiled for choice, I thumb through those delights
and, entranced by what they offer me, I buy all three!
They clearly are the places where I’m meant to be.
But then I notice each of them is just one aspect of
the same infernal place. And so I paid her three times
more than what should be the real asking price.
Some would call it scandal and disgrace. Not me.
It’s fair enough, I concluded; and just what I deserve.
And since it only cost me all my dignity, integrity and
self-respect, I will take the agent’s professional advice.

On visiting my newfound home(s) I couldn’t help but
notice that a dull and heartless echo was the sound-effect.