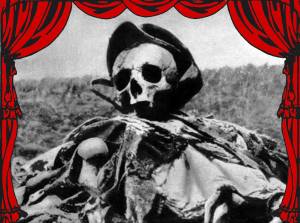 Bent-shapen blows of every blasted gun
I curse you to your face!
Not one of you is worth the smelter’s sweat
which fell like cold unsmiling beads of death
on hot iron’s semi-shining overdress.
Someday you’ll all backfire and then be found
without a trace — as obsolete as rusty bayonets.

You, gun of every size and mould,
which idiots have bought and crooked merchants sold,
your penis-shape a legacy of twisted form
made in the foundry of some fool perverted mind
for stupid man to fondle in his fingers misaligned
and in a long thin frame its phallic counterpart to find
and hammered on an anvil forged from multi-dollar signs.

Black Powder’s acrid fumes which curl seductively
like smoke ring plumes from a playboy’s sneering mouth
[with Sulfur’s stench as foul as death’s own stink —
Charcoal-coloured black as premonition’s darkness ink
while colourless or white Saltpetre makes the link]
was first believed in ancient Chinese thought
to be a new elixir made to bring us immortality.
What futile puerile wide unguided-missile irony!

The madness hell that we, with misplaced delicacy
or as euphemistic ploy (like Hiroshima’s Atom-bomb
was nicknamed Little Boy!) have named as War
is n e v e r in the cause of freedom waged
but is to the advantage of the faceless greys
whose lack of spine and cruel unmanly ways
have only one desire: to keep us all as slaves
(our piercing sharp incisive minds annulled)
from time to time to make our lives a sacrifice
to satisfy satanic bloodlust’s population cull.

Know this: There are no such things as war crimes
for ALL WAR IS A CRIME! — not just those bits that we,
in our political expediency, deem to be substantially
more gory than we think that war should be.