The Petalled Path of Light [poem] 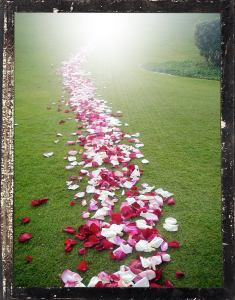 A rrested by the forces of raw unlaw & rank disorder
L eaves its mark upon the soul as if defiled; and then
M olested by misunderstanding fickle fingers full
O f dead men’s digit-bones and barnacles born in
S ecret by some accident of misbirth, I search for
T etracycline substitutes to cleanse my aching soul.

E ndemic deliberate dumbed-down blankness
V aunts itself before my face like window-dressing in
E very empty vacant space we strangely dub as human.
R isking always nothing, life will pass you blithely by like
Y esterday’s stale and long-forgotten dreams which
T eases lost ambition, makes defunct decisions,
H olds a candle to your throat then gloats with neutral
I fs and buts and cowardly intentions — not to mention
N urturing a fear of death when life was never truly there.
G esticulating wildly, my nemesis is feigning usefulness!

I ncoming bullets find their targets in my body-armour as
S eething soldiers, robbed of pederasty, grease their guns.

F or fuck’s sake, almost everything is fake (& just a stunt),
A lthough it’s plain that most this startling view will mock.
K aleidoscope idealistic niceness blights the logic needed to
E nsure no brain thinks further than its cock (or cunt).

L ong live authenticity! emblazons itself with vigour
O n the cockles of my now arrhythmic heart; for
N ot a day goes by without it fluttering as if about to
G ive up on its need to pump. It stops and funly starts.

L ove is just a tattered shadow of its former glory self.
I dealistic wishful thinking imagines that a few fists
V aunted, clenched, into the faces of authority’s
E ndless stream of brawn will bring its power down.

A las, they know not how this evil age plays with their
U nformed insight — undeveloped fledgling soul-light;
T oys with their skindeep fly-by-nightful consciences;
H as experimental mind-fucks with their wilful naivety;
E ntertains itself by laughing at their logical incongruity;
N ourishes itself by feeding on their fearfulness (vacuity).
T hey do not even recognise the evil of this present age,
I magining that sentiment & smiles will change the world.
C onfronting poison-power with flowers is a waste of love.
I n time, this aeon will be blasted into nothing by the Sun.
T hat’s not 4 us 2 fight (for right now is their darkness hour).
Y ou cannot win or lose; so choose the petalled path of Light.