A Flag is just a Rag [poem] 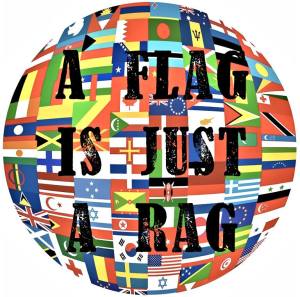 Phonetically speaking…
it’s not too far to go from flag to rag.
But also in reality; for flags are rags
indeed, and only used to generate
the seed for war in this poor world’s
conditioned young, whose heroes true
and few and sane go every day unsung.

For rags is all these emblems are —
just signals from a dying age
upon a piece of colo(u)red cloth
about the way that countries
plunder one another’s goods,
behaving like no human being ever should.
Parading them in front of mindless armies
marching to their wasted deaths, just so
the ones who sent them reap their gold
disguising their exuberance behind
a mask of fulsome grieving so the parents
of the ones they sent unto their deaths
won’t lose their comfort (falsely bought)
from thinking that they didn’t die in vain.
(They did — but if those mums and dads
would understand that stark and icy fact
they could not tolerate the thought of such
futility & hopelessness in their parental pain).

Diversity is merely a distorted worldish view
when it’s deliberately manipulated by the ones
who wish to keep that world divided by a palette
made of dirty-coloured puffed-up jingoistic rags
disguised by emotional manipulators, social engineers
and separation-stimulators as a friendly bunch of flags
then feigning an “assembly” in a country which itself
knows how to trample on the truth —
the superlative and ultimate example of
hypocrisy, autocracy and counterfeit democracy!
Variety is not the spice of life when all it does
Is taint the surface of the earth with strife, division,
competition, false equality masquerading as a planet
unified by falling to their knees before the Beast.
[Welcome to the table of the Prince of Darkness,
eating like a glutton at his alter ego’s orgiastic feast].

No government has ever fought for freedom,
yours or mine — despite their fulminating whine,
however much they protest, whatever they may say.
They fight primarily to carve up other’s territory,
take the spoils of victory, come what may.
Nothing ever is what it may seem,
and Truth is always war’s first casualty.
They fight for all that glitters —
every little thing that gleams.
From flags to rags and rags to riches.
Rags clad loose upon the soldiers dying corpses
in some scorched-earth desolation space,
but never for the propagandist “freedom”
claimed by those who send those souls
to fight their cruel, invasive, sick rapacious wars.
[Responsibility for all this raw obscenity
is theirs and, ipso facto, mine and yours!
For by our sealed and turntheotherwayful lips
and blunt refusal to discern their wicked pranks,
we stealthily condone their guns, planes, tanks,
bootsontheground and boastful battleships].
The riches aren’t for those who fight
[and perish in their rags and who believed
the cold ignoble concomitant lie
that “war is glorious for those who die”]
but those who signed the papers,
gave the orders for the young to die,
will coldly reap their filthy profit
from these manufactured conflicts and
I’m here to tell you that their end is nigh.

Your flag can stand for nothing noble
as it’s soaked in blood. And even you
who give yourselves the name of “neutral”
are just hypocrites for you have aided
bloody sides in times of bellicosity
and sold machines of death across the world.
And blood, although denoting consanguinity
for those who share a family,
when shed to satisfy the architects
of plundrous wastelands, never can
be any more than warpaint
daubed upon the lintels of the doors of hell.
Beyond those doors, your flags will burn
and you too, if you still persist in sending kids
to love a flag to death, and if you fail to learn
the lessons you’ve been plainly put here for,
which, amongst the others, are to understand
the bowels of war which churn the shit of
human conflict & division onto earth’s fair floor.
Your afterlife (essentially a living death),
encaged in Hades with no salve or soul
nor expectation of reprieve, have I with
all my hammerblows been sent to tell.
I hope these words, which come from me
as bullets made of poetry, you will believe.