Three Kings who were not Kings 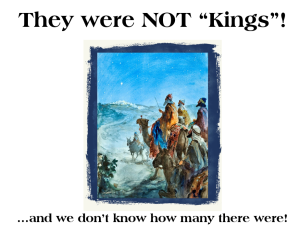 THERE IS A LOT OF TALK ABOUT “THREE KINGS” TODAY, in some countries more than others. In any case, I’m sure you know the Christmas carol, “We Three Kings of Orient Are”. The claim is that three kings brought presents to Jesus the Christ after he was born. Well, firstly, there is no mention of “Kings” visiting the Christ in the bible. There IS, however, mention of “Magi from the East” visiting him. Those were not kings at all but were spiritual leaders from Babylonia. Magi was the name given by the Babylonians, Medes and Persians to the priests and astrologers who were the religious leaders of those peoples. Also, there is no mention that there were only three of them. Certainly, three gifts were mentioned, but there could have been more than three in the entourage. The account in the bible does not mention that there were specifically three magi. The idea of three goes back to a 12th century tradition. It just shows how myths develop over the years. But what does the bible show about them?

These Magi were coming to pay homage to the Christ. We’re told that they were “Magi from the East”, not kings. But how did these men from the East know about the coming Messiah, the promised Redeemer? We know that they followed some strange astronomical appearance in the sky, referred to as a star. (They were big on astrology). But they must have known something in the first place which made them be on the lookout for portents in the sky — signs from God that he was doing something extraordinary; otherwise they wouldn’t have bothered following it.

There is only one place in the world in the pre-Christ era where the coming Messiah was prophetically revealed and that is in the prophecies of the bible. These men from the East must have seen those prophecies. But how? And where? Well, East of Israel, we find the land which is now known as Iraq. In Old Testament times this land was known as Babylonia. The capital of Babylonia was Babylon. So how would those prophecies have got there? Some 550 years before the birth of Christ, the original people of Israel were taken captive by the Babylonians and carried off to Babylon. (You may have heard the Rastafarian pop song, taken from Psalm 137 in the bible, by Boney M: “By the Rivers of Babylon”). Various written scriptures will have gone with them. Not only that, but among those taken, there was the Israeli prophet, Daniel, who was not only highly thought of in Babylon, he was also made chief over all the Magi by the emperor Nebuchadnezzaar. While there, he wrote a very important book of prophecy, which we now have in the bible. In chapter nine, one of the prophecies he receives via an angel says that the city of Jerusalem would be restored in 49 years from then, and that in 434 years’ time after that, the Messiah would be “cut off”, that is, killed. The Magi who served under Daniel would therefore obviously have been familiar with Daniel’s prophecy about the coming Messiah and been anticipating it with great fervour and preserved it through the generations.
Daniel’s book of prophecy is so astonishing in its content — so clear in its predictions — that these men will have been utterly enthralled by its content, as we should also be today! So, at around that appointed time more than 2000 years ago, knowing also that Bethlehem had been prophesied in the Old Testament as the appointed place, these Magi from the East of Israel came searching for the new Messiah to pay him homage.

But why did they bring those particular gifts of gold, incense and myrrh. Is there any significance at all in those gifts? Well, everything in the bible has a significance to it — symbolic, poetic, allegorical or actual. It is filled with symbols. GOLD is a bible symbol of that which is divine, pure, incorruptible, lasting and glorious. The Ark in ancient Israel itself was laid with Gold. (Remember that in the film, “Raiders of the Lost Ark”?!). It basically represented the divine aspect of the Christ. The MYRRH speaks to us of him insofar as he was a man. Myrrh was used to anoint the bodies of the dead: Jesus the Christ himself was anointed with it after physical death by Joseph of Arimathea and Nicodemus. (Also, when he was being crucified he refused a mixed-drink which contained myrrh which was used as a kind of anaesthetic, because he wanted to undergo the full extent of the experience). So myrrh speaks to us about the death of Christ, about His sufferings as a man. He was no more than a babe-in-arms and this myrrh brings us a glimmer of His future death. INCENSE symbolised true prayer and meditation from the heart rising up to God as a sweet-smelling aroma. This symbolises the way that Christ the Light, through conquering death and rising from the dead, defeated the forces of darkness (especially their power over death) and thus paved the way for spiritual Light to be dispensed in great measure across the world in the run-up to the end of this aeon and the birthing of the new aeon. Gold and Myrrh (God made flesh) like an Incense wafting through the created universe, spelling the end for the forces of darkness.

I am writing much more about all of this (incorporating it in a kind of personal spiritual biography) in an upcoming article on which I’m working; but it’s turning into a mini-book, so it will be a little while yet 😊. This was just a taster, showing how myths develop (in this case, “Three Kings” who were not kings at all and were never mentioned as being three either). In the visit of these Magi, the religions of old were acknowledging the completion of spiritual fulfilment in the coming of the Christ the Messiah — a mystery which had been foretold in ages past, hidden in its execution from the powers of darkness, and the gifts of the Magi have been recorded for our deeper understanding.