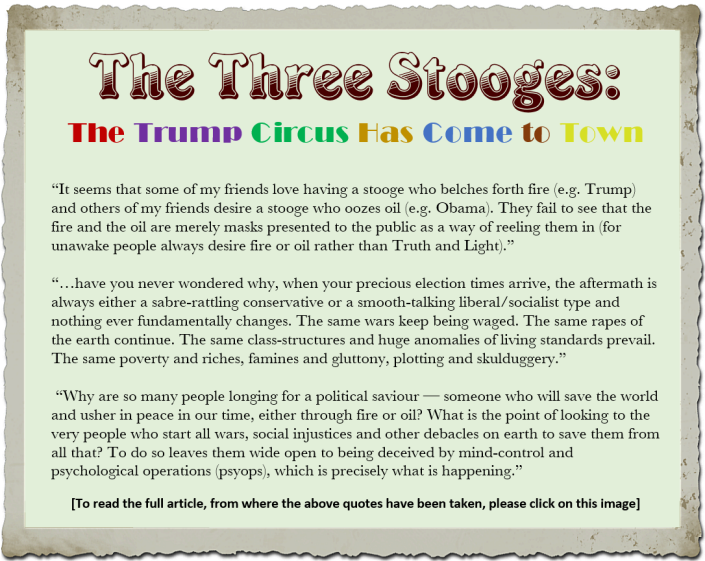 WHILE THE AMUSING TRUMP CIRCUS ROLLS ON AND ON, I have one question: Why are so many people so fascinated with stooges? This is THE era of stooges (as I will show below, three stooges in particular) and it’s time to wake up to our folly. However, there is nothing more bizarre than stooges being fascinated by other stooges. I realise English is a second language for many of my friends here so the dictionary definitions of “stooge” are “a person of unquestioning obedience, a victim of ridicule or pranks, a puppet, pawn, lackey, or dupe”. In other words, a stooge is a fool who is being used and deceived by others — either willingly or unknowingly. That’s not something you would want to be fascinated with, right? And surely you wouldn’t want to be a stooge yourself, right? No one wants to be a stooge, do they? Well, that’s what you would think. But reality reveals something very different — especially when it comes to politics and the media.

Have you ever noticed the pattern in political developments in countries which involve a faux-democracy? By “faux-democracy”, I mean a country which calls itself “democratic” but which uses the clever strategy of convincing people that they vote into office their candidate of choice when really the power elite has not only engineered the whole charade but they do what they want anyway, no matter who is in office. In other words, the “democracies” of this world are really puppet governments controlled by the tyranny of a power elite which no one ever votes for or sees. If you are flummoxed by such a statement, have you never wondered why, when your precious election times arrive, the aftermath is always either a sabre-rattling conservative or a smooth-talking liberal/socialist type and nothing ever fundamentally changes. The same wars keep being waged. The same rapes of the earth continue. The same class-structures and huge anomalies of living standards prevail. The same poverty and riches, famines and gluttony, plotting and skulduggery. In fact, rather than becoming more peaceful and harmonious, it all just gets progressively crazier. Thus, the political merry-go-round goes on and on and most will participate in it like brainwashed slaves. You get a sabre-rattling conservative followed by a smooth-talking liberal/socialist type, followed by a sabre-rattling conservative followed by a smooth-talking liberal/socialist type, followed by a sabre-rattling conservative followed by a smooth-talking liberal/socialist type, ad infinitum, ad nauseam. But it matters not a jot which one is “in office”. Year after year, the people put up with this false choice and get fanatical about it. You know, it’s really strange to be living in a world full of so many stooges. If someone comes to their door selling snake-oil as a cure for cancer they would be up in arms and run that seller out of town. But if their government is based on an even more glaring falsehood they just ignore that and wave a flag or a mindless slogan. I just wonder who or what has got them by the short and curlies? (Rhetorical question: Answer obvious).

Take the USA, for example. In the last couple of decades, there was the smooth-talking liberal/socialist Bill Clinton, followed by the sabre-rattling conservative George W. Bush, followed by the smooth-talking, liberal/socialist Barack Obama, followed by the sabre-rattling conservative Donald Trump. But it makes not a jot of difference who is the president. The same goals will be achieved by the power elite. I remember the hoo-ha when Obama was elected for the first time. The Messiah had arrived! Peace on earth in our time! He was even awarded a Nobel Peace Prize in advance! 😀 How crazy is that? However, airstrikes around the world were far higher during Obama’s tenure of office than during that of George Bush. Nothing really changed, no matter who was in office, yet people were so brainwashed that they imagined it did. Which proves the point that the devil is far more effective when wearing sheep’s clothing. People compare Obama to Trump and imagine that just because Obama is smooth-talking and knows how to work the crowd (he has been well-trained in hypnotic techniques, by the way, as I showed in an earlier article), therefore he is the nice man who should be the leader. I see all my liberal friends on Facebook saying, “Bring back Obama!” and continually saying the most aggressive and even murderous things about Donald Trump. They are all being played. It’s all a game and the people are being led by the noses to get caught up in it. Let’s not forget how most of those liberals cheered on the liberal/socialist Tony Blair when he started an illegal and genocidal war against Iraq based on lies. In early 2003, I was writing articles about those lies and all the liberals/socialists were strangely quiet (and some even criticised me). After all, if it was the smooth-talking socialist, Tony Blair, what could be wrong?

They were being the perfect stooges for a stooge. For the political office-holders are stooges for the tyrannical power-elite. Clinton, Bush, Obama, Trump. It makes no difference whatsoever. They are all stooges. The power-elite will still get their job done for them. Changing president is like an actor changing a costume. The power-elite is the actor and the presidents are the costumes. Can you see that? It seems to me to be as clear as day.

It seems that some of my friends love having a stooge who belches forth fire (e.g. Trump) and others of my friends desire a stooge who oozes oil (e.g. Obama). They fail to see that the fire and the oil are merely masks presented to the public as a way of reeling them all in (for unawake people always desire fire or oil rather than Truth and Light). But why the fascination with stooges at all? For in becoming so caught up with the stuff being served up by the media about these political stooges, we become stooges ourselves. I see Facebook full of them every day. Otherwise intelligent people cheering on Trump and berating Obama or berating Trump and longing for Obama to return. That is all stoogedom! Do you think that it’s an admirable human trait to be a stooge? Surely, it is the most execrable trait of all, for we are called in life to be pioneers for the Truth rather than stooges for lies.

Why are so many people longing for a political saviour — someone who will save the world and usher in peace in our time, either through blistering fire or smarmy oil? What is the point of looking to the very people who start all wars, social injustices and other debacles on earth to save them from all that? (That would be as futile as a little child begging an abusive parent to turn themselves in to the police!) By such foolish longing, people are making themselves wide open to being deceived by mind-control and psychological operations (psyops), which is precisely what is happening. Presidents and the song and dance surrounding their election is one big mind-control psyop and has been for some time. Wake up and smell the coffee! What this clamouring for a political saviour is all building up to is the installation by popular demand of a world leader who will promise peace and security but is really the frontman for the forces of darkness. People have become so used to being fooled by a pretty face masking a bag of snakes and lies that they will fall for it like sprats on a hook, line and sinker. Don’t say you haven’t been warned. It’s coming, as sure as day follows night. I don’t know if I will still be alive to witness that event. I certainly hope so, because even if I am by then on a Zimmer Frame, I will be in the frontline writing an article like this about it! 😊