The Poisonous World of Politics 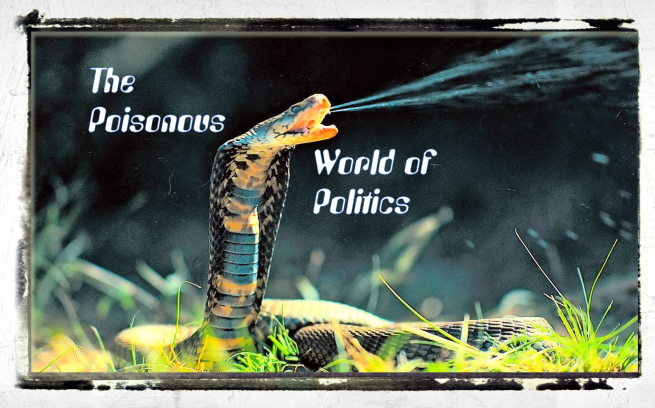 AH, THE THEATRE OF POLITICS! What a wretched dance. All this bluster about the alleged use of nerve gas on a Russian double-agent (i.e. a betraying snitch) and his daughter. Is it mesmerising you? Don’t let it. And don’t bother trying to fathom it out. Your mind will just play tricks with you. It is programmed to play tricks with you (if you haven’t risen above that). Actors get on their hind legs in parliament and bluster about what an outrage it is that an attempted assassination has taken place on Bwitish [sic] soil, to the silly sound of people in the background going “Hear, hear!” in a mock-serious tone. When I saw Teresa May blustering in the House of Commons the other day, I just burst out laughing. Those dead, almost zombie-like eyes of hers and the silly sense of urgency as she pretended she was Winston Churchill promising to fight them on the hillsides, etc. The stench of hypocrisy is overwhelming! Thoroughly nauseating.

The British “security” services run all over the world assassinating and conniving on foreign soils. Do you imagine that the archetype, James Bond, 007 (basically a crude MI6 hitman), was just a movie character? Britain has its assassins employed by MI6 to do their work everywhere. Heck, they even assassinate on British soil too! Remember Dr. David Kelly, the expert in weapons of mass destruction (WMDs) who had originally worked as head of the Defence Microbiology Division at Porton Down in 1984 and was eventually employed in various roles by the Defence Intelligence Staff and was a regular advisor to the Secret Intelligence Service (SIS/MI6)? Within 48 hours of being outed as having spoken to a BBC journalist about the dubious nature of there being WMDs in Iraq (and thereby undermining the main reasons given to invade Iraq three months earlier), he was mysteriously found dead with a slashed wrist and a large amount of co-proxamol in his bloodstream in a woodland near his home in July 2003. That was so obviously an MI6 job, either directly or as a contract killing. Yes, Mrs. May! Killed on British soil! By the British!

Then there is the USA, which has just expelled 60 Russian diplomats (as announced by that embarrassingly immature clown with the highly appropriate name of Trump). The US has itself run around the world assassinating and subverting and fomenting coups d’états on foreign soil for many decades — much of which is in the public domain. The USA’s own CIA is one of the most corrupt and murderous organisations on the planet. One could gag some sick into one’s mouth watching all these clowns blustering away with outrage to the tune of what is plainly a carefully concocted script by those who really run the world (HINT: wake up! It is NOT your elected politicians who run it!).

It is well-known that the Russian intelligence service has a ghoulish poison-making laboratory, designed to create and manufacture toxins which cannot be detected by autopsy, which originated with Josef Stalin’s diabolic “Kamera” (the Chamber) and continues unabated to this day with the laboratory for “Department 12” [see http://www.amazon.com/Biological-Espionage-Operations-Intelligence-Paperbacks/dp/B007BWFMMG Please make sure you see also the following link:  http://en.wikipedia.org/wiki/Poison_laboratory_of_the_Soviet_secret_services ]. Whereas historically Mossad tends to use car-bombs and the CIA favours aeroplane sabotage or “suiciding” for assassination, Russia has always preferred the use of poisonous substances to bump off its enemies. (British spooks will use any method which is most convenient — even dumping you in a little suitcase just to baffle everyone!). However, this latest attempted assassination could very easily be a false flag operation run by MI6, designed to make it look like the Russians did it so that this barrage of aggressive hypocrisy can be unleashed. It could even be a test run preparing the way for a more serious attack in a well-populated public place. This is how these people operate. Britain has its very own “Doctor Death” Ministry of Defence biological and chemical weapons laboratory at Porton Down (where Dr. David Kelly was employed), just seven miles from Salisbury where the Skripals were attacked. As I said above, if you try to fathom this out, your mind will just play tricks with you. There is so much obfuscation (important word, please learn it)… everywhere.

For some years I have been saying that “we ain’t seen nothin’ yet” and that the time will come when so-called “terrorists” (who have mostly been created by Western intelligence agencies to carry out their own dirty jobs) start generating nuclear, biological or chemical “incidents” in public areas. We already know that the whole show is designed ultimately to push the naïve and easily led population into accepting totalitarian rule by a world government. The more extreme the “terrorism” gets, the more open to subjugation the masses become. It is crystal clear that the present “crisis” has been manufactured as part of that process.

So please do not become agitated by this latest act in the unfolding play of life. What you are being told in the “news” is tightly controlled and mostly untruthful and deliberately disinformational. Always bear in mind that the media is the “entertainment division” of the power elite. People have said to me recently that they cannot sleep because of what is happening in the world. Please do not succumb to such thinking because you then become a slave of the forces of darkness which want you to be in a fearful state of mind for you will then be easy to manipulate. This is the time for courage and insight. Those forces of darkness are not acting randomly. All the blinded psychopaths who are running this world only do so because they have been temporarily permitted by God to do so in order to serve his higher purpose of the complete renewal of the universe. Darkness exists to encourage us to seek the Light. Ultimately, everything which has ever happened has done so for that very purpose and to humble us, making us realise that without the Light of God — which has been manifested in this age through the Christ, who prophesied clearly what would happen at the end of “this present evil age” — we are nothing and can do nothing.

The dark hubris of the powermongers has been allowed to have full rein on this earth in order to demonstrate its utter futility. All the bluster of these politicians, presidents, prime ministers and other ideological prostitutes who strut and fret their hour upon the stage in this holographic world will be seen to have been pissing into the wind like naughty children urinating out of a coach window on a day trip excursion. They think that they are achieving their goal of global hegemony, but all they are doing is digging their own graves deeper and deeper. When a human heart realises this fully, then nothing which takes place on the face of this earth could engender fear in that heart. Everything which happens here is wholly in the control of divine power, with angels as the messengers and channels of that power.

One thought on “The Poisonous World of Politics”

I agree. No use worrying. Out of our hands. Not to say we don’t have choice as to our actions. Funny thing, that karma. It has a way of catching up to us and biting us in the keester….. eventually.