The Great Paradox of the Spiritual Life 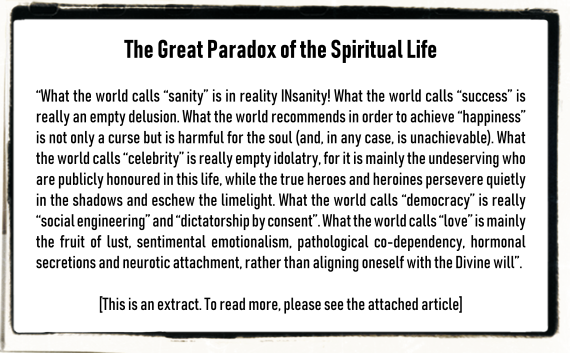 CHRIST SAID SOME VERY CHALLENGING WORDS about the pathway for the genuine spiritual pilgrim: “Enter through the narrow gate, because the gate is wide and the way is spacious that leads to destruction, and there are many who enter through it. How narrow is the gate and difficult the way that leads to life, and there are few who find it!” Wow! Just meditate on those words for a while; for they sum up what is demanded if one is to be a serious disciple of Christ and follower of His Light. The gate is narrow and the way itself is difficult. The deep spiritual life is not attractive to the superficial dilettante, for such a person knows that there is the need for total dedication and personal sacrifice but comparatively few people are serious about personal change and genuine spiritual revelation… As Christ also said: “If anyone wants to become My disciple, he must deny himself, take up his cross, and follow Me”. This is the diametric opposite of the narcissism and self-obsession which is so prevalent across humanity.

However, despite having described the spiritual way as being “difficult” (about which there is much more in later sections), the fact is that for the soul who is dedicated to Christ as His disciple and follower of His Light, entering this “narrow gate” leading to the “difficult way” and “denying oneself” and “taking up one’s cross” is not at all a chore but is a sheer joy! In fact, it is only “a narrow gate” and “a difficult way” when viewed from the point of view of those who have not yet gone through that gate or stepped onto that pathway. Once the journey has been embarked upon, what would normally be called “affliction” by the uninitiated — alongside the “denial of self” or “taking up one’s cross” — is seen instead by the disciple of Christ to be a necessary experience for the growth of the soul. This is part of The Great Paradox of the spiritual life.

G.K. Chesterton wrote: “A paradox is truth standing on its head to gain attention”. I have always loved that idea. For in the world of the genuinely spiritual human many aspects of life are paradoxically turned completely on their heads. For example, what the world calls “sanity” is in reality insanity! What the world calls “success” is really an empty delusion. What the world recommends in order to achieve “happiness” is not only a curse but is harmful for the soul (and, in any case, is unachievable). What the world calls “celebrity” is really empty idolatry, unwarranted on any level, for it is mainly the undeserving who are publicly honoured in this life, while the true heroes and heroines persevere quietly in the shadows and eschew the limelight. What the world calls “democracy” is really “social engineering” and “dictatorship by consent”. What the world calls “love” is mainly the fruit of lust, sentimental emotionalism, pathological co-dependency, hormonal secretions and neurotic attachment, rather than aligning oneself with the Divine will. The world’s panaceas for anomie, unhappiness and depression (e.g. alcohol, sex, drugs and entertainment) are merely papering over the cracks rather than demolishing them. This is how the genuinely spiritual human sees all these things — viewing them as the diametrical opposite to how the world sees them. To those who revel in rational materialism, the spiritual life is a topsy-turvy world of weirdness, irrationality and even stupidity. To the genuinely spiritual human, that crazy spiritual life is ineffably “home”. Truth standing on its head to gain attention.

I had a personal experience of this paradox of the spiritual life recently when the jaw of a human (who had already confidently asserted to me that “there is no spiritual, only psychological”) dropped open on discovering that this book is a free gift to whoever wants to read it. She had begun the conversation by asking what my “marketing strategy” was for the book, in order to make money out of the sales. When I said that a dedicated website was being set-up and as many will be alerted to the publication as possible by whatever channels are available, although there is no slick money-based marketing strategy involved, she accused me of being irresponsible and even hypocritical! She was adamant that I was going about this the wrong way. The gist of her assertions was that “time is money” and websites cost money, therefore the book should cost money. I simply said that this is what I have chosen to do as I could never feel comfortable with charging money for a spiritual project designed to open hearts and change them, no matter how many months or even years were involved in its creation; but she was totally contemptuous about that.

I have had similar conversations with a couple of other people and I always say that the synchronicities which can be brought into play when one puts a project in the hands of the Holy Spirit always amaze me (for the Spirit is the ultimate “market strategist” on a spiritual level!). It is my experience that non-spiritual, rationalist-materialist people will often become angry when they discover someone is giving away something for which they would avidly charge money. This is not only because their understanding of “wealth” is very different to those for whom spiritual riches are infinitely more important, but they also want to control you — to force you to be like them — yet realise that this is not possible, hence their anger. They just cannot understand what motivates the heart of the one who sees beyond the material to an entirely different universe where very different values apply. But instead of simply agreeing to differ, or accepting that you are different to them, they want to tear your heart down in some way if they can. This, again, is part of the paradox of the spiritual life. The mass of people will believe that your thoughts and actions are stupid, irrational, irresponsible, or even insane; whereas you know that you are acting in alignment with the Divine will and that never have your thoughts and actions been more sane, sound and sagacious.

Being viewed as a nutcase because of one’s spiritual journey and subsequently bearing the brunt of so many people’s anger is part of the “difficult way” about which Christ spoke in the quotation I gave above. In the same way that angry religious people and even demons continually got in Christ’s face, confronting Him for no reason other than fear-based spite, so it will be with His disciples — even today, especially today, as the world spirals crazily into its last-gasp Endtimes ego-fest. This is part of the “cross” which His disciples must bear.

However, despite the difficulties encountered along the route, the persevering soul rejoices to be on that “afflicted way” which leads to life, not only because it is a far worse fate not to be on it at all but because one is finally fulfilling one’s mission on Earth! Such a soul also knows that once on the way of Light, there can be no turning back. This is a fundamental spiritual law of life: The torch which is given to every pilgrim, once willingly and consciously accepted, can never be extinguished. No matter how difficult the way becomes, the true pilgrim can never leave the pathway which leads straight to the reward of glory. He or she may deviate onto some side-tracks through temporary stupidity (oh, I know those stupid side-tracks only too well! I should create a map of them! 😀 ). But they will not generally last for long (though it can take longer with some more stubborn souls) and ultimately will be seen to have been in order to learn some necessary lessons and to be strengthened; and s/he will always return to that “difficult pathway” which leads to life. Always. Every time. Guaranteed.

[Extracted from the chapter, “Enrichment in the Spiritual Life”, in my upcoming 500-page book, “Narrow Gate ~ Pathway Strait: The Road I have Chosen”. You can find all details of the book by clicking here ]
.
.
© Alan Morrison, 2018

This entry was posted in Articles, Book Excerpts, Reflections.