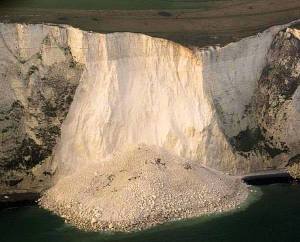 The sound of rubble falling down a cliff face
[never seen a face so high and deeply scarred]
fills the updown arc of my waking dreamscape
with a thimbleful of treasure — tocsinlike.

Record all signs and omens, said the hag whose
apples had been left inside my car (without
a single word of explanation, as it seemed so far)
and so I put my pen to work — a catalogue.

This one-way traffic doesn’t interest me at all.
I came here for a two-way stretch inside this
chosen prison with its broken lines and schisms
interrupted rhythms, dissonances — unromances.

Inspecting piercingly more closely to the foot of
all that tumbled rock, I saw a sculpture had been
formed of every human body made throughout
the fallful dredge of history’s lies — an ugly scar.

Looking further still into that heap of ballastry
[by then my hands were burned down to the bone
{for in the heart of it there raged a sacred fire}
I now [alone] found V & O & L & E — but cryptic’ly.