Grace in the Dirt [poem] 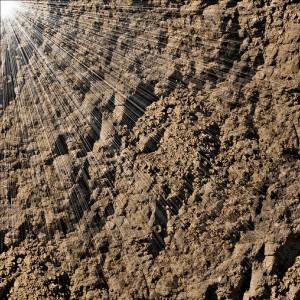 Looking at an onion with the utmost wonder
in my curiositical heart is a ritual I practise
at the start of every sunrise day for it speaks to me
of many layers — most of which are hidden —
and reminds me of the way that circumstances
oftentimes unfold in ways by which we only see
the outer coating of the skin when there is
so much more within which we ignore.

Our puny little minds imagine everything should rhyme
according to the fractured endings peppering our own
diffuse and idiosyncratic lines. But when I use my
Z-ray vision (not my eyes but something [w]hol[l]y else —
inscrutable, irrefutable and, above all, wise), I find that
onions and their hidden rings (or spherispiral springs)
are ubi-every-quitouswherely symbolising things.

Please let me now expand this layered theme so we begin
to joyly see the infinitely hugely bigger scheme this brings.

People hear about a baby or a lovely maiden raped
and say (deduce): There is no God. For (they then go on)
if there was (they reason) how could he (I use “he” not in
gender sense for those who easily take offence but simply
in the place of “it”, which to me seems far too stark and
icethinglike to fit) withhold his infinite grace and mercy
thus to spare that maiden and the little mite from
such a terror-ridden night and all the tributary darkness,
emptiness and starkness which will hinder their
serene advancement through this wilderness we call
(I wish there was a better, more appropriate and seemly
not so much insanely and mundanely word) the world.

To say that hardship, suffering and strife proves there
is no God displays a lack of understanding of the chasm
underneath this onion-layered life. For it is only through
unravelling the skein of black and swimming through the
acid rain of darkness that we keep ourselves on track
towards the light from where we came and to which
we one day will return (though in the meantime burning
up a spate of lives in alternating caterwauls and sighs
for on this endless cycle every jot of augmentation thrives).

I knew a lovely couple who fell full in love, then had two kids,
then living in the city they succumbed to drugs and lost the plot.
Then, after checking into rehab while their parents had the kids,
they found the plot again, made some wholesome friends
and turned their broken lives around, bought a little farm
in Wales, filled the car with all their stuff then made the drive there.
But along the lengthy motorway they were — all four of them —
snuffed out, crushed to a pulp beneath a lorry’s metal cab.
The only thing remaining of their microbus was just a fiery slab.
Those lovely mended souls were — as folks would clichely say —
killed before their time, as they were blooming in their prime.
What justice can there be in such a thing as this? as all the people
said through tears when that family, now dead, was buried in
some loamy earth; but they were surely worth much more
than such an end as that (as everyone who knew them said, in fact).

There are many who think that Grace could only ever function
cleanly through benevolence (by which I mean “that which
*seems* good to us”). Mistaking karmic fallout for malevolence
we force the hand of angels to provide us only with some pap
(by which I mean a diet made of soggy toothless baby-food
but this is just another trap which doesn’t do us any good).
For example, could a meeting of twin-lovers ever be a cause
of suffering and heartache for any one of all the souls involved?
It all depends on how the ever-present “problem” known as Karma
is ultimately going to be, to the Universe’s satisfaction, solved.
For flamely twins can meet before all readiness has been achieved
and cleansing comes through gruelling pain not once but many times
again, again and then again. We each have journeys to explore
and these can take us into darkness, danger, horror, war, furore.
And if we fail to find the grace hid deeply in the dirt nor realise
that grace does not preclude the fact that people will be hurt,
then we do not deserve to flirt with love or any other so-designedful
rescue mission dreamed up in the of myriad of angels’ minds
in each of all the countless billions of stars above.

For what we sow we reap — in this life or another — & in ways that will
be plain for all to see (though rarely is this instantly). Because of this,
we fail to understand the delicately woven nature of our destiny.
We glibly set our stunted selves as judge and arbiter of circumstances
which we cannot grasp unless we peel that on-i-on and see the many
layers placed within still layers more by law (that’s what our lives are for).

How often we pronounce these bald subjective judgements of a death,
or of some pain or suffering, of car wrecks full of beauty queens, of
children smashed to smithereens by stepdads, dead; mothers everywhere
and little kids bedeck the wards of hospitals and hospices with shiny
baresome heads — the ravages of chemotherapy; teenagers are drowned
while rescuing heroic’ly their winsome pets; or planes which plummet
to the ground — the air resplendent with the sound of screaming
last-gasp passengers (and, in a sense, we’re all just passing through) —
conveniently we erase the beauty of the harsh reality of karma or of
‘what-we-sow-we-reap’ (not all in one big hugesome heap but spread out
bit by bit throughout our multitude of lives), whether we are husbands,
ladies, lovers, wives or even babies have to learn the hard way on the anvil
of our fate as each event, experience, acts like a kind of gateway to the life
which we, in all our folly, must then live to balance out the messed-up
wayward way we’ve been before — it functions as a law — until our actions
we can no longer ignore (for which I’m grateful as it guarantees our growth)
and until from sleepingness we wake and then begin to act responsibly
and not just like some driftwood buffeted so helplessly around upon the sea.

We judge the painful piercings of life with planetfuls of ignorance —
our limited experience, the stunted parish-pumpish runts we are!
When someone’s taken from this earth, perhaps they have been called
to service in another world and all our judgements of a “tragedy” are
based not on the hidden final role (though nothing’s final when it’s seen
against the context of the all-encompassing and fluctuating whole)
but only on what we can see: A shell and memories left behind for us
to find and this is our mistake — the fuss we make with funerals and
wakes & golden urns, pomp & circumstance, chrysanthemums & ferns,
the need we feel to treat a corpse (an empty shell) ‘with dignity’ (which
merely signifies our fears of death (or hell) about which we would never
make a joke. I freely here confess I’ve no such yoke. So when I’m gone
[if any other soul is there to see the fun banality of crumpling flesh]
just thrust me in a bin-bag, take me to the nearest forest, dig a hole
under a glory tree then drop me into it without a trace of ceremony.
For I (the true I not some holographic GUI) will already be up and free.

So here am I in all my
onion ringsome wonderment
and flingly wond’ring wingsome glidely
overridely smiling widely
kissing every atom with my molten lips
so lissomly [though smittenly]
yet listenly with pointed ears
at frequencies my mind can barely bear
to endless dreamly sing-song scatter-wistly
stream through time with seamless beauty
never wanting wrongly only justly rightly
sight for unsore eyesly
soaring wisely thrively
ravelled yet unravelling
while travelling at faster than the speed of light
a thousand times removed from futile fights
against the unstained lure of truth.